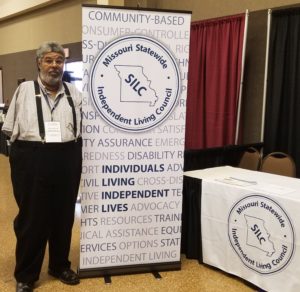 I completed the required studies for a Master of Business Administration (MBA) Degree with Specializations in Organizational Leadership and Health Care Administration in July 2013. You will find that what I may lack in paid work experience I more than compensate with my drive, passion, and determination to succeed. I have dedicated my life to the ideals of independent living, community inclusion, and socioeconomic and political empowerment of persons living with disabilities.

I believe my leadership experience and research skills enhance my ability to fulfill what-ever tasks are before me. I have invested a lot of volunteer time and expertise into causes that are near and dear to my heart. From the spring of 2001 thru 2009 I served on the Mayor’s Committee for Persons with Disabilities in Durham North Carolina. In January 2002 I was unanimously elected as the new 2nd Chair of the committee, and from 2004 – 2009 served as its 1st Chair. Through my leadership we established Durham’s first MCPD Office/Disability Resource Center in City Hall, published our first official newsletter, and I led the committee to greater focus on the disability community.

In November 2015 I was unanimously elected to the First In Families of North Carolina (FIFNC) Board of Directors to add my drive, leadership, and experience to their ranks. I have served as a Council Member on the North Carolina Council on Developmental Disabilities (NCCDD) since July 2007, in many leadership roles, including Co-Vice Chair. At the 2015 National Association of Councils on Developmental Disabilities (NACDD) Conference in Sparks, Nevada I was elected to its Board of Directors, and recognized as a new member to its National Self-Advocate Leadership Circle.  For a brief period I served as President of the Association of Self-Advocates of North Carolina (ASANC) in 2006 which led to my appointment to the Board of Directors of The Arc of North Carolina (The Arc of NC) where I serve as President.

Prior to July 1, 2007 the Protection and Advocacy Systems Administrator (P&A) for persons with disabilities in North Carolina was the Governor’s Advocacy Council for Persons with Disabilities (NC GACPD), a state administered agency. This arrangement hindered the P&A from truly doing its job so there was a driving force in the developmental disabilities and mental health communities and professional supporters for redesignation of the P&A to an independent non-profit law and advocacy organization. In 2005 the GACPD approved a demonstration grant to design a non-profit statewide disability representative board, so the Disability Rights Center of North Carolina (DRC-NC) was established and I was elected president and chief administrative officer by its members. As President/CAO I represented the organization in all official capacities; attending many GACPD board meetings and NCCDD council meetings, and other venues across the state.

Early in the spring of 2007 I and Adele Foschia, VP began meeting with John Rittelmeyer and the board president of Carolina Legal Assistance (CLA) to begin negotiating how to unify the DRC-NC Board with CLA. Later, I and Adele were elected to the Board of Directors of Carolina Legal Assistance, beginning the unification process. Effective July 1, 2007 CLA was officially appointed by Governor Easley to become the new P&A for persons with disabilities in North Carolina. Soon thereafter CLA changed its name to Disability Rights North Carolina (DRNC) and the rest is history.

In December, 2013 I and other founders rotated off the DRNC Board, which I truly miss serving on. Oh, I guess I failed to mention I am an individual with a Developmental Disability, I was born without arms. I am excited about this stage of my life for I have worked hard towards this juncture. My MBA degree marks the hopefulness of many opportunities for me, and I stand ready for the challenges.

In October 2017 I was offered the position of Executive Director of the Missouri Statewide Independent Living Council.  Monday, November 06, 2017 marked my first official day as ED of MOSILC.